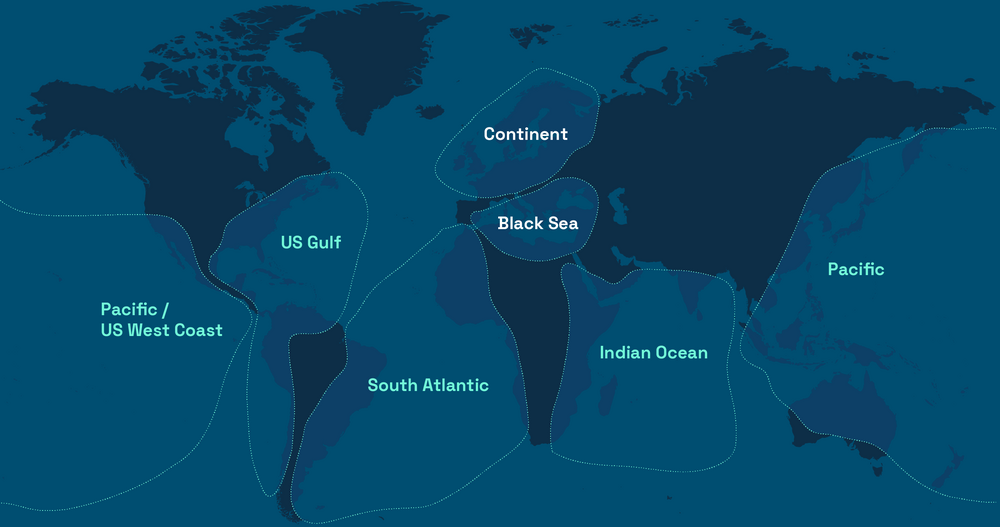 The South Atlantic team serves clients loading and/ or discharging cargo on the Atlantic coasts of South America and Africa. Cargoes are carried on a trusted base of ships from our core owners and include both spot movements and industrial multi-year contracts.

The South Atlantic team is managed out of the Oslo office and operated on average about 20 vessels during 2020.

The US Gulf team serves the US Gulf/US East Coast/North Coast South America area and since July 2020 also West Coast South America, helping a broad base of clients with diverse ocean transportation needs, ranging from industrial customers to traders and buyers of several commodities.

The US Gulf team is managed out of the Oslo office and has representatives in the US and Chile, operating on average about 15 vessels during 2020.

The Continent team’s main activity is transport of various steel and bulk cargoes from the Continent and the Baltics.

The team is managed out of the Oslo office and operated on average about 10 vessels during 2020.

The Black Sea/Mediterranean team’s main activity is transport of various steel and bulk cargoes from Black Sea and the Mediterranean worldwide.

The team is managed out of the Oslo office and operated on average about 15 vessels during 2020.

Through its significant customer base, the Indian Ocean commercial team is active in most dry bulk
commodities and services clients on spot contracts to long term industrial contracts. The commercial team also runs extensive parceling operations within Asia and South Africa on various bulk and breakbulk commodities.

The Indian Ocean team is based in the Singapore office and operated an average volume of about 25 vessels in the Handysize to Ultramax segment during 2020.

The Pacific / US West Coast portfolio is active in established core trades as well as in niche cargo flows throughout the region. The team is considered a specialist in slag, fertilizer, clinker, coal, steel products, grains, iron ore and pet-coke.

The Pacific / US West Coast team is run out of the Singapore and Seattle offices and operated a fleet of about 25-30 vessels on average during 2020, ranging from Handysize to Ultramax.